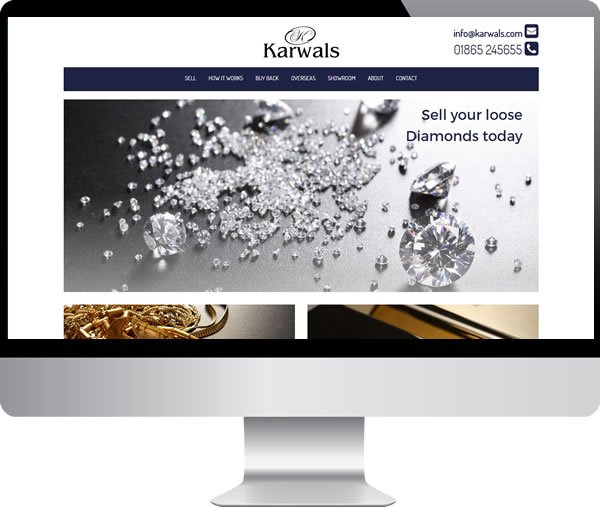 Karwals was originally founded in the early 1950’s in Punjab, India. Since its early beginnings it has established a high quality Oxford based Jewellery service and a national Cash for Diamonds service.

Karwals approached Websites by Mark to revamp the existing site and to covert its existing format to a CMS (Content Management System). For Karwals it was important that the site looked stylish, modern and performed well on Google. Apart from the normal request for a site that was flexible and easy to manage, a gallery was required as well as several custom contact forms in addition to one which needed a multi-part format.

The existing site had several issues which included a lack of visual engagement and a design that looked tired. In addition technically the website was coded in a way which was not as search engine friendly as it could be.

With the above requirements, WordPress seemed a natural choice. WordPress is currently the world’s most popular CMS for good reasons, with its open structure, ease of use, natural SEO and low hosting requirements made this a match made in heaven.

We matched this powerful framework with Plugins which handled such diverse features as multiple slide shows and multi part forms with other Plugins which would ensure maximum exposure on search engines like Google.

We also provided retouch and photo composition services to help visually tie in all the elements together.

Visually the new site is exciting and along with the natural SEO of the site has meant Karwals have progressed on what they had before.

The site is robust and the hosting has easily managed to handle the increase in visitors the site has seen over a period of time since it went live.

Rajan, the owner has several times commented on how much he likes the site which was produced on time and on budget.